You are here: Home / News / Exceptional home in Governors Land, now on the market.

The classic, elegant exterior of the Georgian Federal home on Ann Johnson Lane in Governor’s Land was what first enticed Caz Wesley when she was house-shopping in 2008. 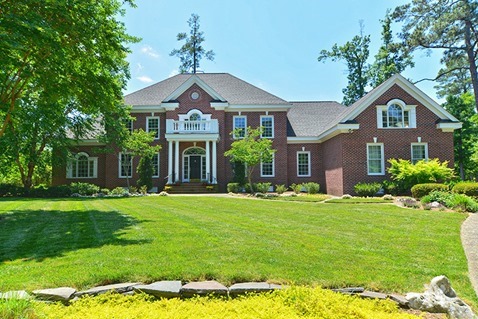 “I could see the house was an architectural gem when I walked up to it,” said Caz, an interior designer. “On the exterior, all four sides are classic, dark red brick with keystones over the windows. The front stoop has four brick steps and gracious, curved black railings with beautiful balustrades going down both sides. There’s a Federal-style portico with four pillars over the Charleston-style front door, which has an arched, webbed glass window above it and sidelights on both sides. There are just so many beautiful architectural features.” 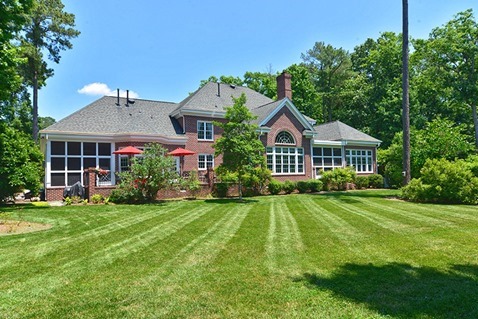 Caz and her husband, Don, who works in the field service, bought the nearly 5,000 square-foot home after discovering its classically inspired but family–friendly interior was as attractive as its exterior. “I knew the house would be beautiful because it was designed by Scott Cleckley, an architect who lives in Governor’s Land,” Caz noted. “I’m very discerning visually, and he pays a lot of attention to detail.” 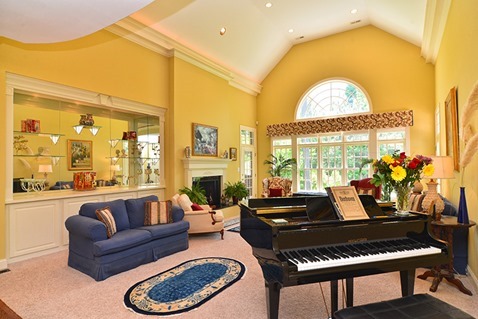 Caz, Don and their son, Arthur, then 13, moved to Governor’s Land after being stationed overseas, and were excited about living in a Williamsburg-area golf community. “There are three big golf communities in the area, but we chose Governor’s Land because it’s on the water, it has a beautiful club overlooking the convergence [the junction of the James and Chickahominy rivers], and we also like tennis and swimming,” said Caz. “It was the ideal community for us.”

The house itself, built in 1999, also proved to be a great fit. “It’s an ideal family home for people with kids or grandkids,” said Caz. “Also, I love entertaining and this house is perfect for that, too.” 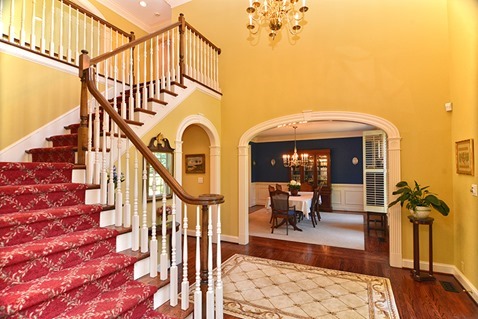 From the dramatic, two-story foyer, a staircase — decked out with gingerbread molding along the side—rises to the second level and a Juliette balcony with arch and keystone at the top. To the left of the foyer is a den and to the right is a formal dining room, both with large, arched openings and detailed trim moldings. 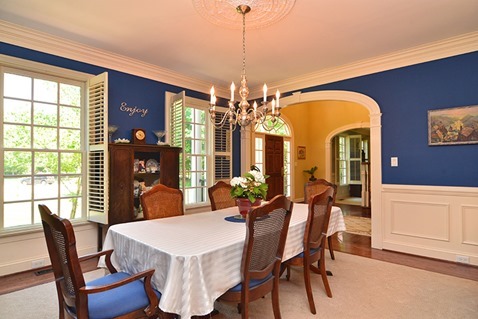 The main level also features a light-filled, two-story great room – overlooked by the Juliette balcony — which leads to a kitchen with a large island that Caz uses for setting up buffets. One side of the kitchen opens to a breakfast nook/sunroom with an unusual octagonal ceiling and a six-person, bay window seat that includes storage cabinets beneath it. The kitchen exits to a large, raised patio/veranda and to a screened backyard porch. 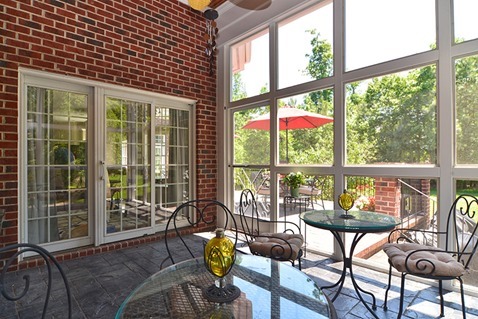 “The flow from the kitchen to the porch and the huge veranda is perfect for entertaining,” Caz said. “We have a fire pit, a bar, and two patio tables with umbrellas on the veranda, and three grills set up on the step-down patio we added beside the veranda. We’ve had many get togethers there, including our annual luau.” 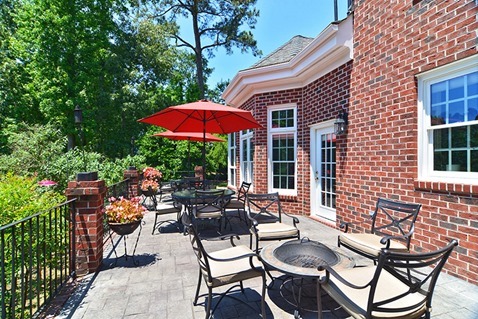 We also love playing games in the huge, flat back yard,” Caz added. “We play touch football, dodge ball, volleyball, and croquet.” She noted that the yard, which has woods across the back, also works for less rigorous activities, such as birding, with benches placed strategically to overlook bird feeders. Caz has sighted Cooper’s hawks, bald eagles, pileated woodpeckers, bluebirds, and hummingbirds, among others. 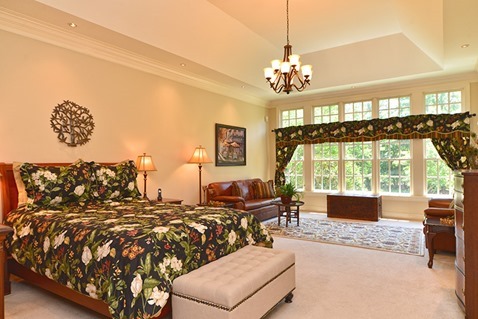 The house is ample for a large family, with five bedrooms, four of them on the second level and a 24’ x 15’ master bedroom suite on the first floor. The master bedroom features a tray ceiling and a wall of windows that are nearly floor-to-ceiling, while the master bath has a double vanity with desk, whirlpool bath tub, and double-headed shower. The master suite connects to a stone-floored, private screened porch with a 6-person hot tub.

A 32’ x 21’ bonus room over the garage (accessed via stairs from the kitchen) has served as an excellent home base for Arthur. “My son fell in love with that room when we first moved in,” Caz said. “He used it for his bedroom until he changed to another bedroom on the second floor, and the bonus room became a family room with a foosball table, pool table, and flat screen TV. Our house was the hang-out place for Arthur and his friends because of that room.” 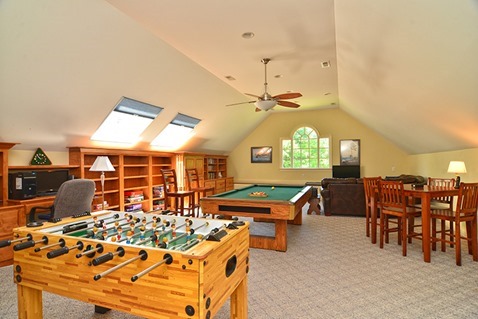 Arthur also made good use of the stone driveway in front of the three-car garage. “We have a basketball hoop there, and he has played there many hours with his friends,” Caz noted.

The family made a few changes to the house after moving in, particularly to the great room, where they replaced and redesigned the fireplace to make it better fit the style of the home. “It was a very rustic stone fireplace that was not complementing the rest of the house,” Caz said. “I made it into a traditional Georgian mantel with dentil molding and beading, so now it looks like it has always been there.” She also raised the fireplace and installed a high gloss, black granite hearth and surround that compliments her black baby grand piano that sits in the room. 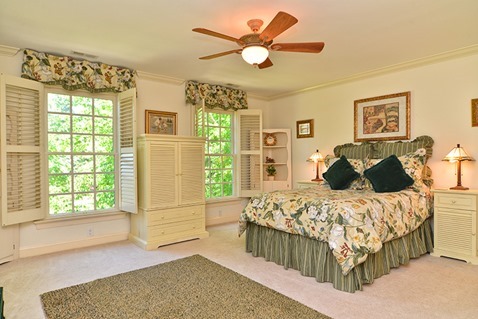 Caz also repurposed a large, rectangular alcove beside the fireplace that the prior owner had used for a hefty entertainment center. “I installed a multi-functional piece, with cabinets on the bottom for storage and a countertop that could be used to set out hors d’oeuvres,” Caz explained. “I installed glass shelving with mirrors behind it and added adjustable lighting. I use the shelves to display my collection of art glass and ceramics.” Caz finished the piece with trim moldings and decorative accents that brought it into unity with the room and the rest of the house.

Caz also replaced the foyer’s black chandelier with a more traditional, candle-style chandelier, added wainscoting to the den in order to give it symmetry with the formal dining room, and installed crown molding to rooms on the second floor. The family kept the home’s oak hardwood floors, but stained them a rich, dark cherry.

“As an interior designer, I wanted this classic style of architecture,” Caz said. “Also, I had inherited a lot of antiques, and the house is a beautiful place to display them.” 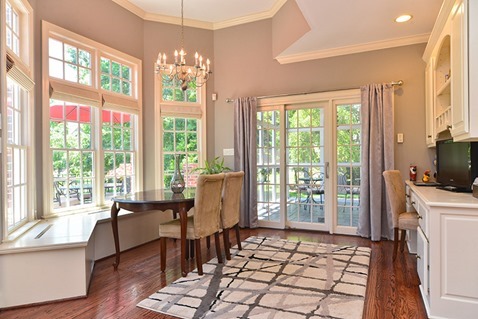 The location of the Wesleys’ house within Governor’s Land has been a plus, Caz said. ‘We’re on a cul-de-sac and near a pool, tennis courts and a playground. This is a big community, and it can take some time to get to the back areas of it. But since we’re near the entrance – but not so close we can see it—it’s easy in and out. That’s a benefit for a commuter.” 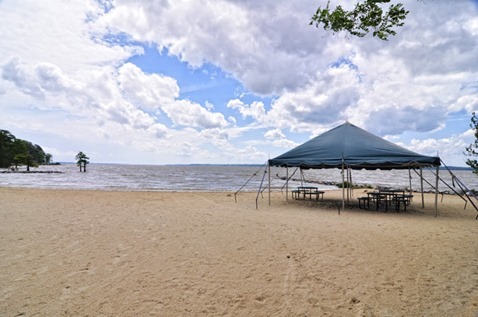 The Governor’s Land community has myriad recreational amenities, including the 18-hole, Two Rivers Country Club golf course that was designed by three-time Golf Architect of the Year Tom Fazio; Golf Digest has twice named it one of the Top 10 courses in Virginia. Caz uses the tennis courts, and Arthur uses the nautilus gym next to the tennis courts several times a week. “It has all the latest equipment and is perfect for a teen who likes to work out,” Caz said. 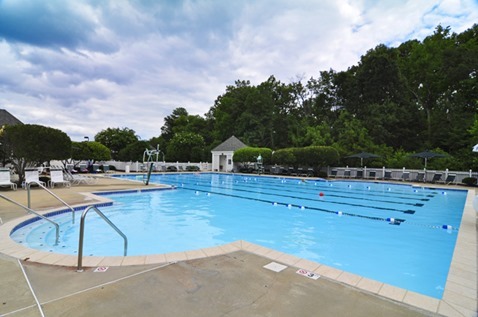 Arthur also has long been a member of the community’s swim team. “Being on the team is a great way to meet other kids,” Caz said. Arthur also enjoys the Governor’s Land’s beach, a swimming area near the community’s marina on the James River. “There have been swim team activities there and we reserved the beach for his graduation party. You can swim, Jet Ski, and there’s a boat slip,” said Caz. “It’s also a beautiful area to just sit and look at the water.” 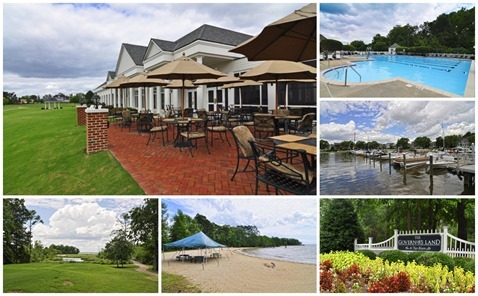 Although the Wesleys have enjoyed the Governor’s Land clubhouse, which offers fine dining and casual restaurants, occasional live music, and game nights, they often head to nearby New Town, a nearby Williamsburg commercial area with a mix of shops, restaurants and movie theatres. Another regular excursion is driving 10-15 minutes to Colonial Williamsburg to walk their dog along Duke of Gloucester street (known as D.O.G. Street to the locals), check out the weekly farmer’s market, or visit one of their favorite hangouts, Aromas. “It’s an outside café and has live music on Friday nights,” Caz said of the café, which is located on Prince George Street.

To help sell their home, Caz chose real estate agent John Womeldorf , based largely on the recommendation of a friend who also lives in Governor’s Land. “We originally found this house online, and know that the web is a good way to advertise. We wanted an agent who is tech savvy, and we knew that John was because we’d seen his “Mr. Williamsburg” web site ,” Caz said. “We also were told that John works with a lot of clients from out-of-state and from out-of-the-country.”

Although she is leaving, Caz cherishes the years spent in her exceptional Governor’s Land home. “I love decorating, and I got to decorate my dream home,” Caz said. “People have come into my house and said, ‘Wow!’” It has been like advertising for me as a designer.”

Why the stories? Because these aren’t just houses, they’re homes.

Mr. Williamsburg knows that when you’re looking for a new place, you’re searching for more than just four walls plus amenities, you’re looking for that welcoming refuge we call home. That’s why we go beyond the standard “4 bedrooms, 3 baths on large lot” statistics, to share how others have lived in this house, to reveal the home’s unique personality, to help you decide whether this is a place where your family could thrive.

Likewise, we realize that you’re seeking not simply a development within a particular zip code, but also an opportunity to become part of a community. That’s why we share our sellers’ experiences as members of that neighborhood.

We trust these stories will assist you in finding your way home.

Want to tell your home’s story? 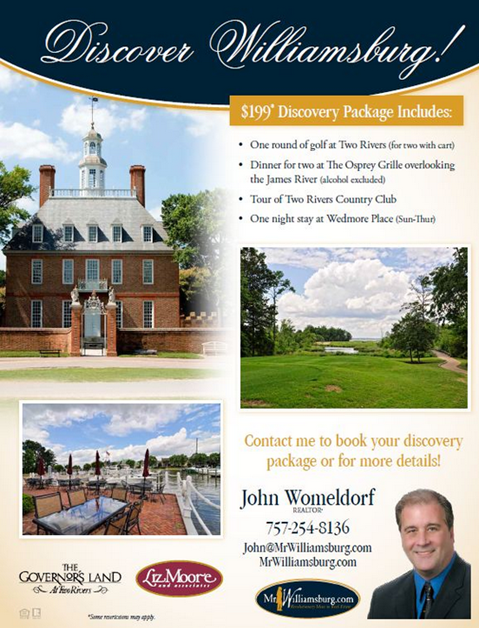