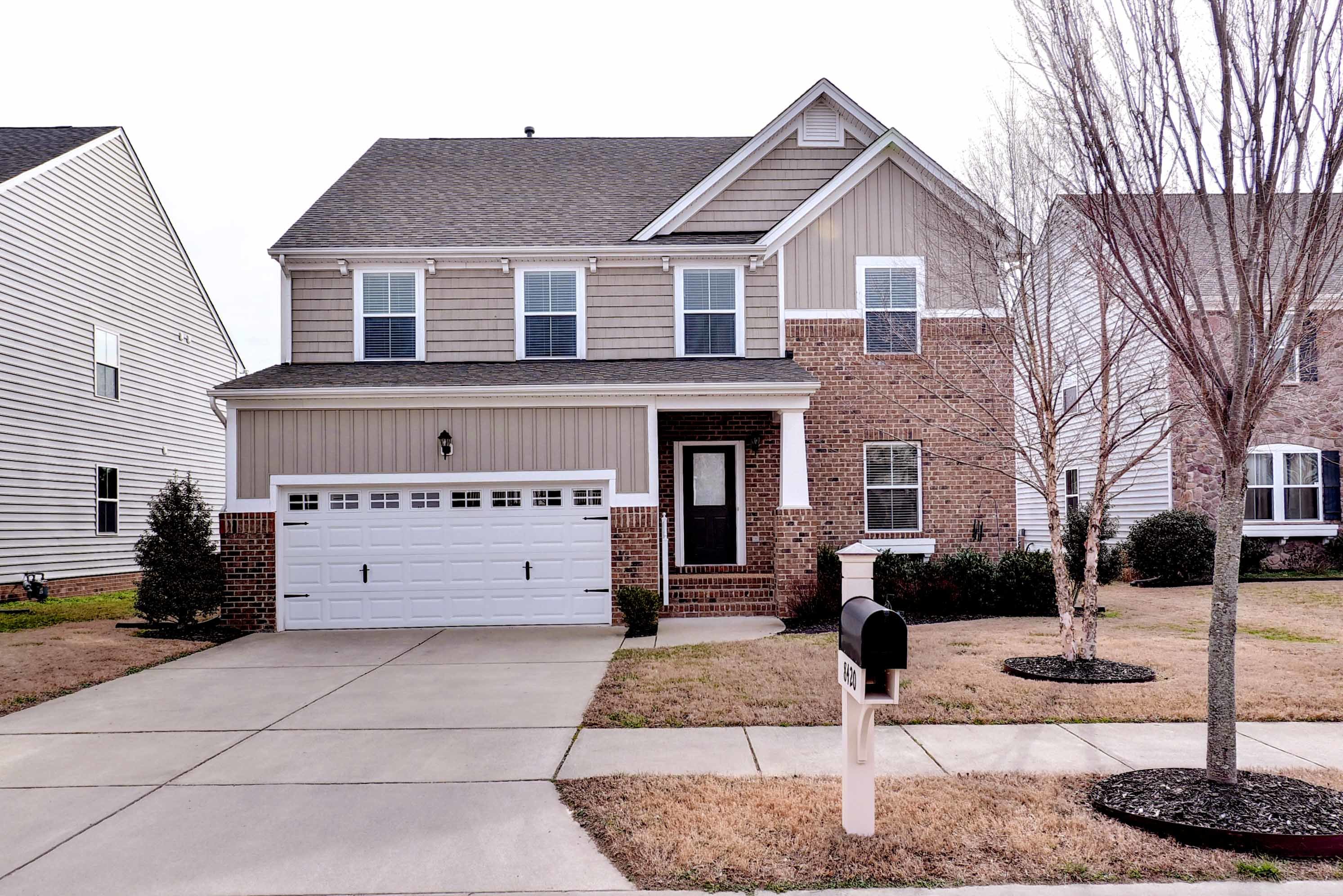 Mr. Williamsburg knows that when you’re looking for a new place, you’re searching for more than just four walls plus amenities; you’re looking for that welcoming refuge we call home. That’s why we go beyond the standard “4 bedrooms, 3 baths on large lot” statistics, to share how others have lived in this house, to reveal the home’s unique personality, to help you decide whether this is a place where your family could thrive. 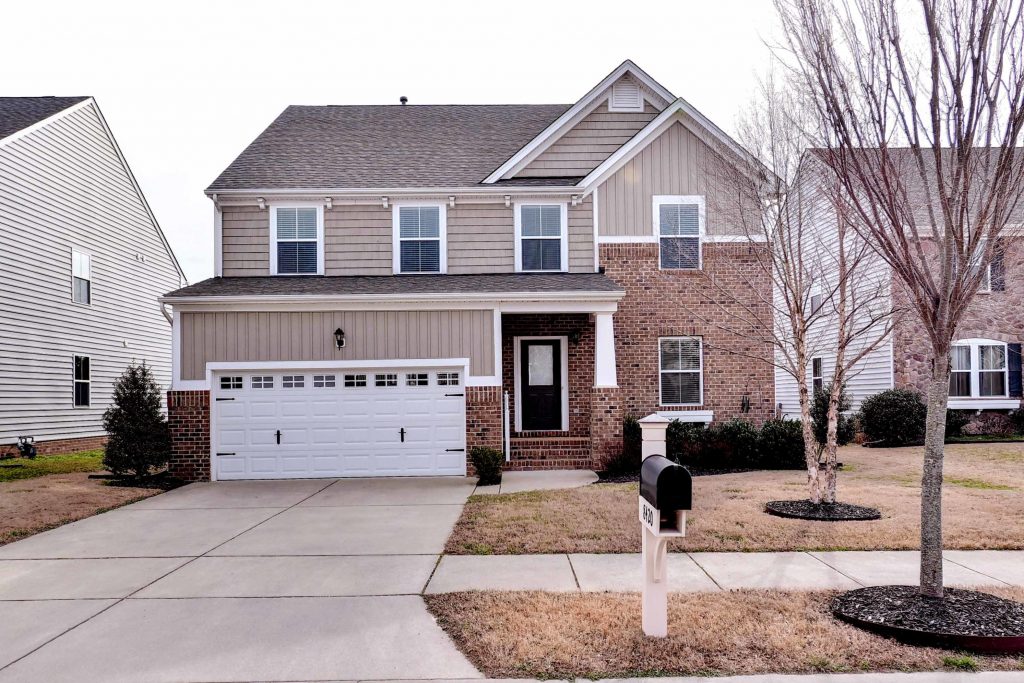 Likewise, we realize that you’re seeking not simply a development within a particular zip code, but also an opportunity to become part of a community. That’s why we share our sellers’ experiences as members of that neighborhood.  Read on to hear about the Repps’ experience living in the White Hall neighborhood in Toano VA

The hustle and bustle of living in Yorktown was wearing thin for Kim and James Repp.

“We really wanted more space and a more country living feel,” says Kim of the couple’s 2010 decision to move from their townhouse in Yorktown to a single family home in Toano’s White Hall.  “We loved that the White Hall community was part of a huge farm, and we loved the wonderful sense of history there.”  One neighborhood feature the history buffs particularly liked was the 1805 Whitehall Plantation farmhouse, and now serving as the community’s club house. 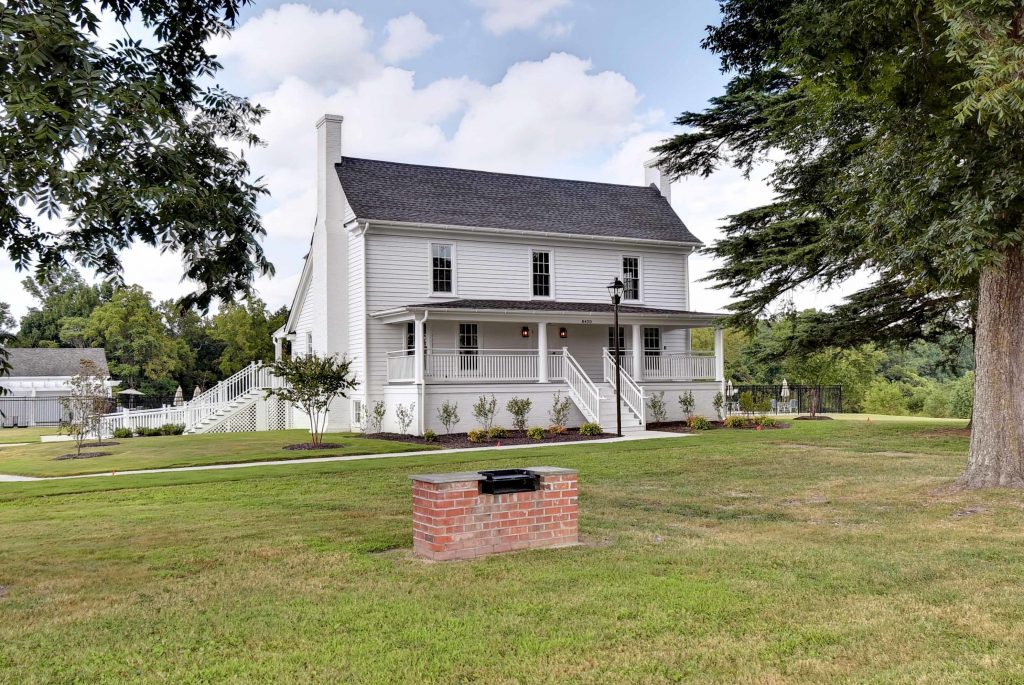 The Repps also loved that gaining a slower-paced lifestyle did not mean giving up convenience. “Even though we were moving to the country, we would still be close to everything,” Kim notes. “Less than 15 minutes to Busch Gardens, 10 to Colonial Williamsburg, 20 to Jamestown, and under 40 minutes to Richmond.”

Thinking Big… Basement Included. The couple’s White Hall move also gained them much coveted extra space, especially for storage. They chose the largest home model offered by the developer, then Ryan Homes:  a 3,040 square-foot home with 2.5 baths, 4 bedrooms with loft, and 2 huge walk-in master closets. Best of all, the two-story home has a 1,360 square-foot, unfinished basement that is pre-plumbed to accommodate a future bathroom. 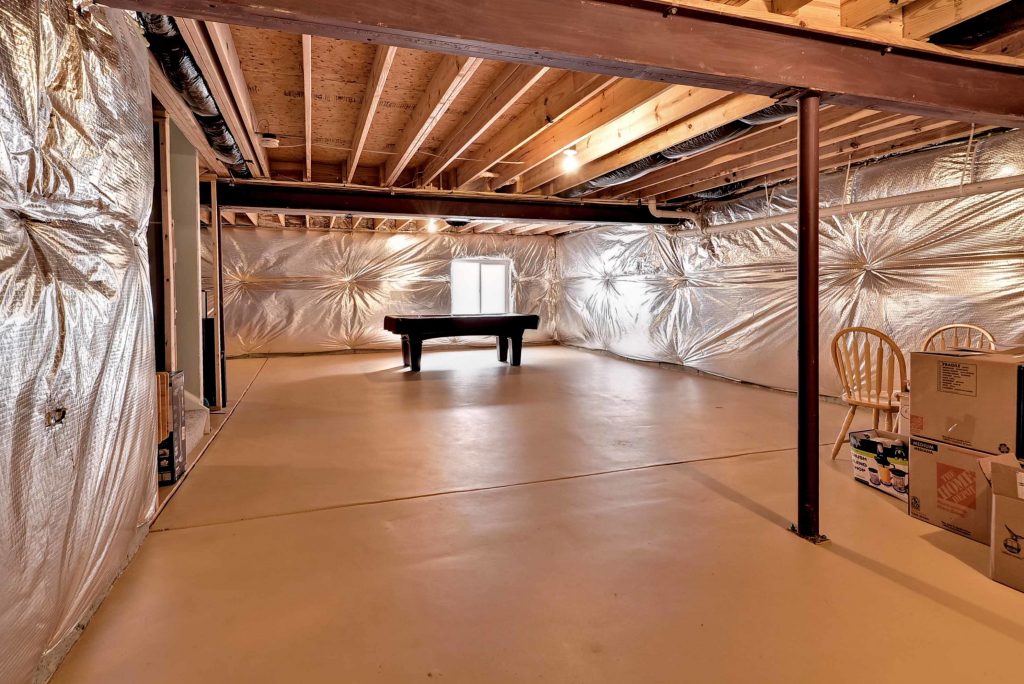 “We’re from Michigan and we really wanted a basement,” says Kim. “But in Yorktown we couldn’t get a home with a basement because of the water table. And, we ‘re really lucky to have one in White Hall because only a couple of streets here have homes with basements.”

“Many people here use their garages for storage,” James adds. “But we don’t need to do that because we have so much storage space in the basement and through the house. We can actually use the 2-car garage for our cars.”

The Repps’ basement also serves as a workshop for James, a civilian Naval architect.  James also set up a pool table in the basement, and enjoys playing with his son.

Designed for a Growing Family. In designing their home, the Repps looked ahead to how they and their children would use it over the years. So, instead of enclosing their fifth bedroom -– located between the bedrooms of their two children — they created a loft space for play and recreation. 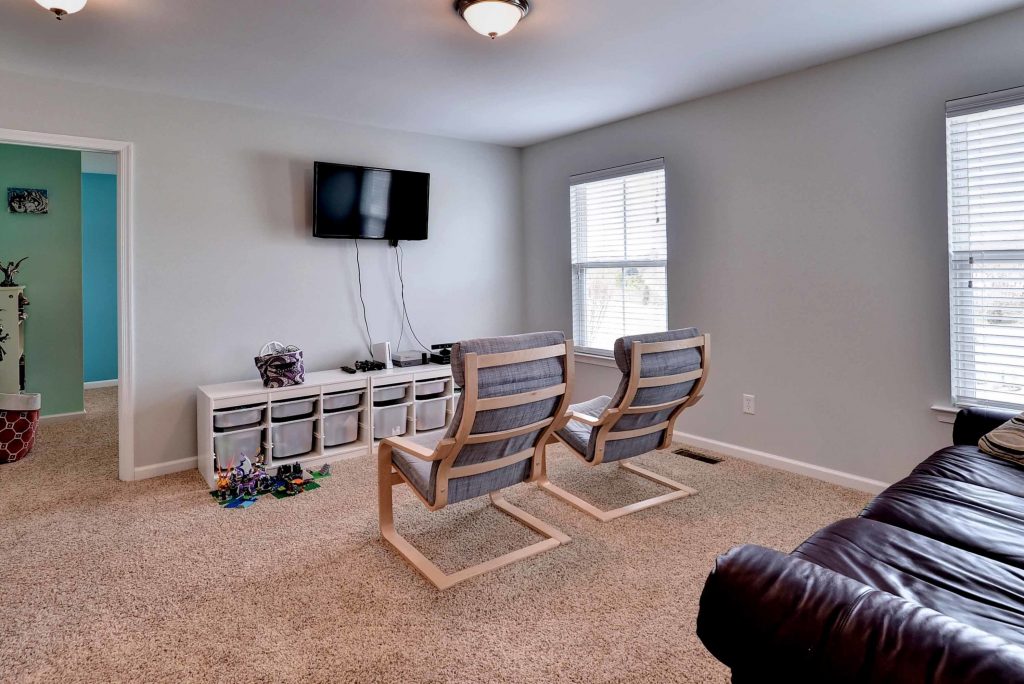 “I’ve loved seeing the evolution of the loft over the years, as the kids have grown,” says Kim, an at-home mom who homeschools their two children. “When the kids were little, it was a play room filled with Playskool stuff. Now that they are older, it has a leather couch and is set up for gaming.”

The back yard, which has a 6-foot privacy fence and a stand of tall pines in the back, also has changed with the children. “We used to have a swing set there and now we have a trampoline. The kids are there all the time.”

The spacious home includes a living room and a separate dining room, although the Repps share most meals in the eat-in kitchen.  “We don’t use the dining room as much, but when we have a big group for dinner, the kids can eat in the kitchen while the adults are in the dining room,” Kim says. “Also, my son’s piano is in the dining room. Sometimes, like at Christmas, he plays it while we are at the table.” 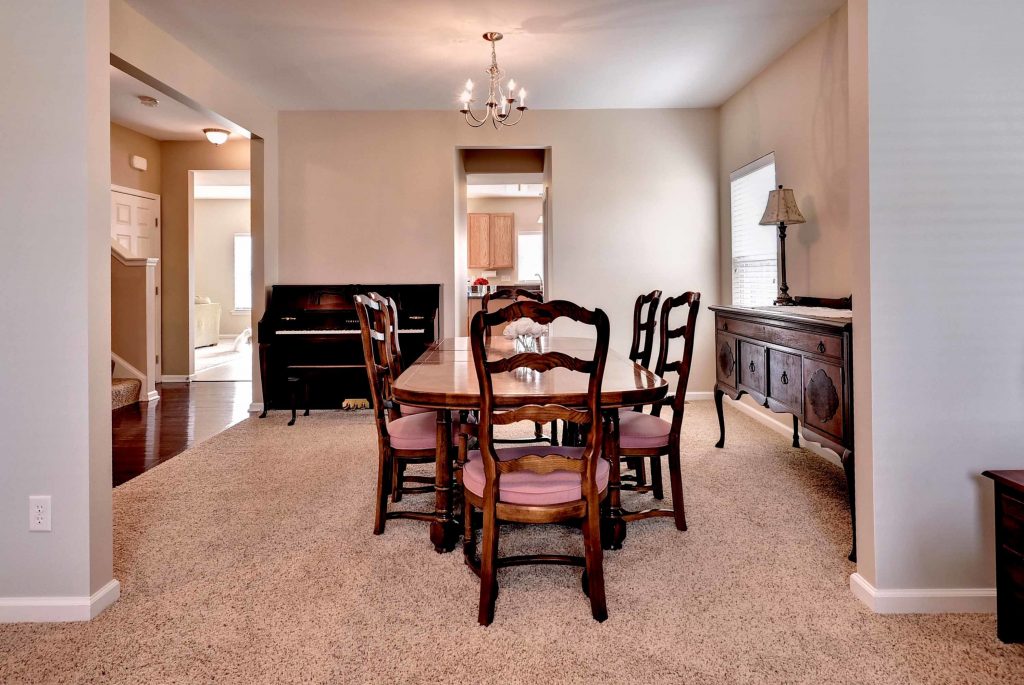 The kitchen is open concept, connecting to a large family room, Kim’s favorite space. “It is gigantic, and we have an L-shaped couch that is comfortable and has a lot of places to sit. When the kids were young I could watch them from the kitchen.” An office, a half-bath, and a mudroom round out the main level. 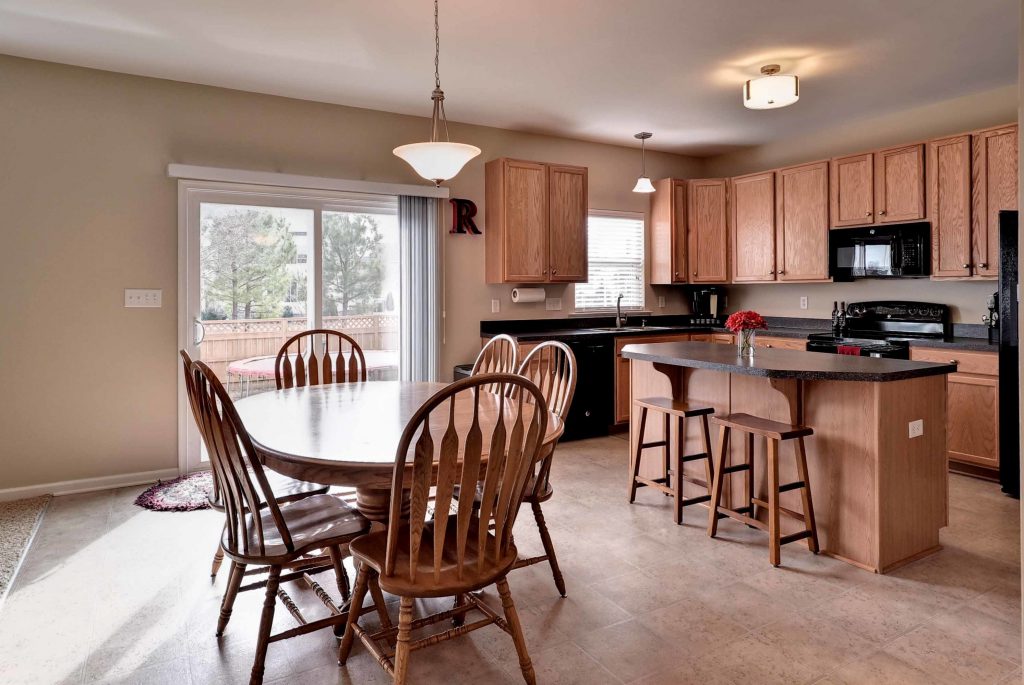 “I have seen this house change as the kids grew from little kids to older and, if we didn’t have to leave, I could imagine them going through high school and college in this house,” says Kim. “There’s enough space for all that growth. I could even imagine them bringing their own kids back here.”

Building a “Phenomenal” Neighborhood. The Repps’ home was the 8th built in White Hall.

“We were excited about being one of the first residents of White Hall,” Kim says. “We liked the idea of growing into a community, of making it into what we wanted instead of entering into an existing one.”

“It has grown so much since then,” Kim adds. “It has become a phenomenal neighborhood, with so many activities. There are the Memorial Day and July 4 barbeques, the Easter egg hunt, and my favorite, Cookies with Santa.  We have Mrs. Claus and the most amazing Santa; he plays the bagpipes. There are crafts and the kids get hot chocolate.”

“I also love that the community adopts a family to provide foods or gifts during the holidays,” Kim adds. “My kids loved going out shopping for the family.”

Some of James’ most memorable times in White Hall have been during Halloween, when many neighbors are out trick-or-treating. “A lot of the neighbors are outside, and sometimes there are even adult beverages,” he laughs. He also enjoys the neighborhood Christmas lights contest.

Kim notes that although White Hall is a large development there is a real sense of community there. “While it is family oriented, there is a mix, including older adults and those without kids. They have activities geared not just to kids but also toward adults, like game nights and paint-and-wine nights. This neighborhood ticks all the boxes.” The Repps have close ties to their neighbors, and are godparents for one family they met when they moved in.

The community also offers diversity in children’s education. “We homeschool our children and there is so much here for homeschoolers,” Kim notes.

Kim points out that some neighborhood students attend private schools, and some go to the public schools. “The schools are considered top-notch. I have heard nothing but good things about the schools here.”

White Hall Neighborhood Amenities.  The family makes good use of the White Hall amenities, including the tennis and basketball courts, playgrounds, clubhouse, and pool. 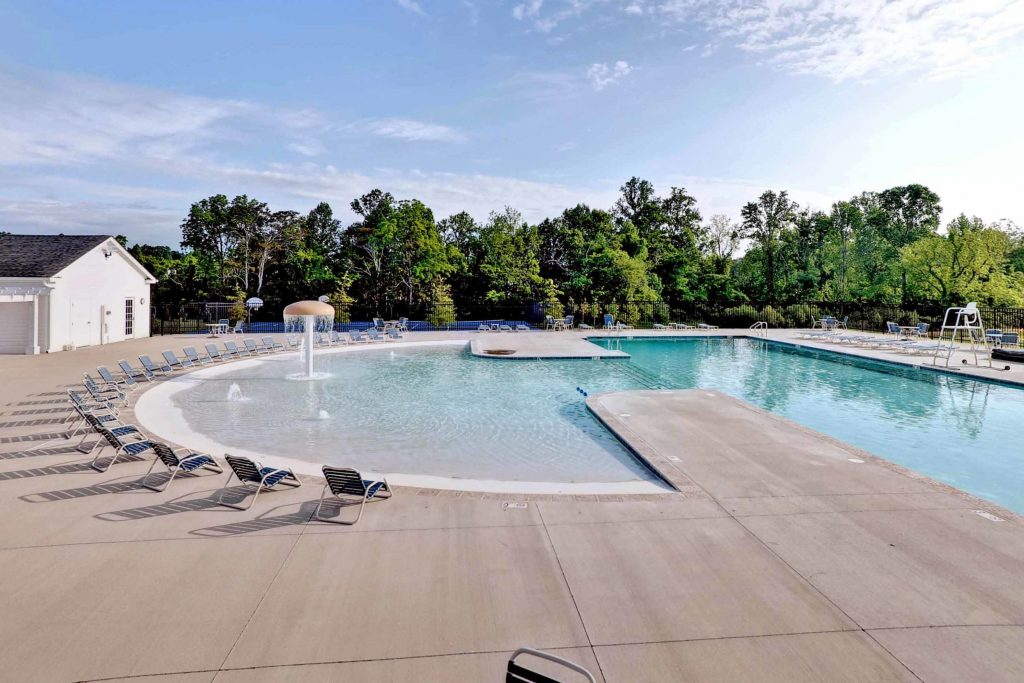 “I love the pool,” James says. “There is a zero walk- in, like at the beach. And there’s a good-sized deep end where you can actually swim.”

The Repps’ home is in just the right spot for easy access to the pool.  “We aren’t right on top of the pool but just a street over from it,” Kim points out. “And, we can walk to the playgrounds. Even though the kids are older, sometimes we still go there and they use the swings and the slide. “

Directly across the street from the Repps’ home is a walking/ biking trail that leads around a farm field, and the family can see nesting bald eagles from their front yard. The neighborhood sledding hill is also just across from the Repps’ place.

White Hall is a very pet friendly neighborhood, offering dog-walking stations with bags throughout the community. The Repps have a dachshund-poodle mix named Trouser, who is trained as a service dog to bring into nursing homes for socializing and into schools for children to read to. Kim’s daughter was thrilled to march with Trouser in the Colonial Williamsburg Christmas parade.

4H is very big in the rural community, and both Repp children are active in it. Kim also notes that a local Toano resident owns the community farm, and will allow interested neighbors to come by and help with chores.

The community’s proximity to Williamsburg makes it easy for the couple to attend James’s business school events at his alma mater, William & Mary. And, the family’s favorite nearby restaurant, Two Drummers Smokehouse barbeque, is a spot where they often see neighbors.  James, who enjoys craft beers, also notes that there are a number of local breweries nearby, including Alewerks Brewing, Virginia Beer Company, and Brass Cannon Brewing.

Sad to Leave. Although the Repps envisioned staying in their home for many more years, James’ job requires that they relocate to Oregon.

“Otherwise, we would stay,” says Kim. “There’s a lot of love in this house, a lot of music here. This home is very comfortable and everyone here is so welcoming.”

The couple chose John Womeldorf to help them sell their much-loved home. “When we bought here, we didn’t have a realtor, but Ryan Homes had used John and gave us his name,” James says. “He did a great job getting us into the house and even took care of an issue we had with the refrigerator. That’s why we went back to John to help us now.”

Why the stories? Because these aren’t just houses, they’re homes. We trust these stories will assist you in finding your way home.

Want to tell your home’s story? Contact John “Mr. Williamsburg” Womeldorf at (757) 254-8136 or John@MrWilliamsburg.com  and we’ll get you started.

To schedule a visit to the this home or others in the Williamsburg or Hampton Roads area call/text 757 254 8136 or email John@MrWilliamsburg.com 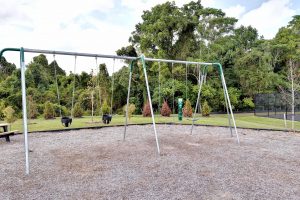 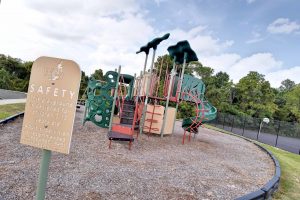 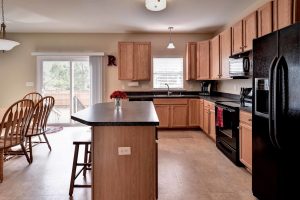